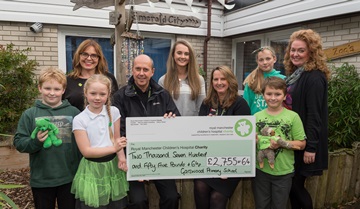 Over the past three years, Garswood Primary School in Hamilton Road has held a number of fundraising events which has seen pupils get up to all sorts of challenges such as sponsored swims, Christmas jumper and wear a hat days – all to raise money for the Royal Manchester Children’s Hospital’s Children’s Brain Tumour Research Network in memory of 10-year-old Zac Barston who passed away in 2015 following a brave battle with an aggressive brain tumour called Glioblastoma Multiforme.

Garswood’s contribution, which currently totals £2,755, was recently celebrated at a special presentation ceremony at school where Zac’s parents Jeff and Donna, as well as his sister Hannah, collected a cheque from staff and pupils who wore green, the colour of the Royal Manchester Children’s Hospital Charity. All of the money raised goes towards treatment and improving the quality of life of youngsters with brain tumours.

After receiving the cheque, Jeff said: “ The ongoing support from staff, parents and children at Garswood Primary School has been amazing and we are so grateful for their efforts to raise funds in Zac’s memory for something so close to our hearts. Zac was such a caring young boy who loved his time at the school and he would have been so proud to know that his memory is helping other children unfortunate enough to be in the same situation.”

Headteacher Pam Potter said: “Zac was an important part of Garswood school and is remembered for his kind and thoughtful manner and great sense of humour. His courage and bravery will be forever admired.

“I’m enormously proud of the children and delighted with the community and their commitment to raise funds for this worthy cause which we’ll continue to support.”