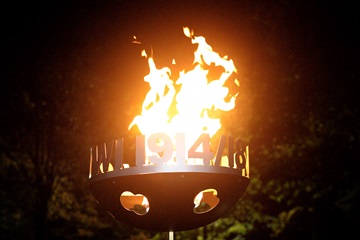 Traditional Remembrance Sunday services complete with readings, musical performances and a two-minute silence, were held in Victoria Square and outside Earlestown Town Hall where parades – headed by veterans and young representatives from the cadets, scouts and guides – were watched by thousands of spectators.

The Mayor and Mayoress of St Helens Councillor Pat Ireland and Lynn Glover; Deputy Mayoress Janet Johnson; Council Leader Derek Long and the borough’s MPs Marie Rimmer and Conor McGinn were among those in attendance at both events.

Following the service in Victoria Square, the town hall opened its doors to residents who had the opportunity to view a local World War One photo exhibition, courtesy of the St Helens Community Archive.
Meanwhile, as part of the St Helens 150 events programme, St Helens participated in an international tribute event on Sunday evening.

The ‘Beacons of Light’ tribute saw a gas fuelled beacon lit at 7:00pm in Taylor Park to symbolise the ‘light of hope’ that emerged from the darkness of war.

St Helens Council’s Armed Forces Champion, Councillor Lynn Clarke, added: “This year we were proud to play a part in the historic international event, ‘The Beacons of Light’ to recognise the contribution and sacrifice made by the men and women from our own community.

“For such a small town, many St Helens soldiers played such a massive part in the war effort, and it’s important that their actions are never forgotten.”

Bridge Street closed at its junction with Water Street/Chalon Way

Amazing Blake in return to Brindley