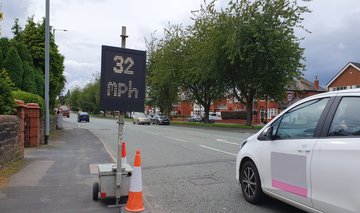 In a bid to encourage motorist to think twice about their speed, St Helens Council has introduced a temporary mobile sign which can monitor how fast a vehicle is travelling along some of the borough’s busiest roads.

Known as a speed indicator device (SID) – the sign is vehicle activated and flashes up the speed limit for the particular stretch of road it’s on, followed by the actual speed clocked by a passing vehicle.

The moves come as research shows that permanently placed signs are becoming less effective due to drivers becoming used to where they are, with the mobile SID deemed to be a more flexible approach for it can be moved around more easily and cover more sites.

St Helens Council’s Cabinet Member for Environmental Services, Councillor Lynn Clarke, said: “As a council we are committed to promoting road safety and initiatives like this are a really good example of the work we’re carrying out to deter speeding in our borough.

“The sign flashes the current speed limit and the driver’s speed which could help to break the habits of drivers who consistently use excessive speed. We can then assess the results and identify if any further investigation needs to be undertaken.”

Locations – such as St Helens Road, Lowfield Lane, Warrington Road and Gorsey Lane – have been identified from speeding enquiries but checked using virtual travel time software – a high level check which allows the council’s traffic department to sieve out locations where there is no regular speeding.

The sign – which will be installed at a certain area for one full week before moving on to another location – is part of a two-month trial centred around road safety awareness – with the potential for an extended period if the experiment proves successful.

The Wonderful World of Words