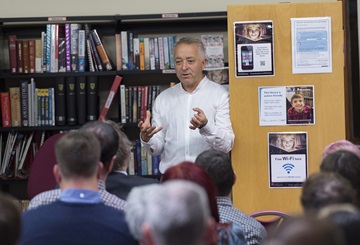 Frank delivered two free public events in St Helens libraries during National Libraries Week as part of the Heart of Glass Take Over Festival, with readings for ages 16 plus, adults and families at Rainhill and Eccleston libraries from his popular books including Millions and Sputnik’s Guide to Life – soon to be a Dreamworks film.

Frank, who was born in Rainhill and educated in St Helens, has written television episodes for Coronation Street, Brookside and Doctor Who and contributed to movie screenplays including: Forget About Me, Butterfly Kiss, Welcome to Sarajevo, 24 Hour Party People, The Revenger’s Tragedy, and Millions. In 2012 he wrote the opening ceremony for the London Olympic Games, which referenced St Helens’ town motto ‘Ex Terra Lucem’, from the earth comes light.

In 2004, Frank wrote a book for children based on his own screenplay ‘Millions’, which won the 2004 Carnegie Medal. His other works include Cosmic, The Astounding Broccoli Boy, Sputnik’s Guide to Life on Earth and several Chitty Chitty Bang Bang novels.

Council Leader Derek Long (pictured with Frank below), who attended the Rainhill Library event, said: “Frank’s event in Rainhill Village was ‘Cosmic’! The readings from The Unforgotten Coat showed the richness visitors can bring to our country. He is yet another fine example of a St Helens borough resident with a truly international reputation.”

For full details on more fantastic events, many of which are free to attend, visit www.culturalhubs.eventbrite.com or pick up a brochure from any St Helens library.

For more information on the Take Over Festival programme visit www.heartofglass.org.uk.