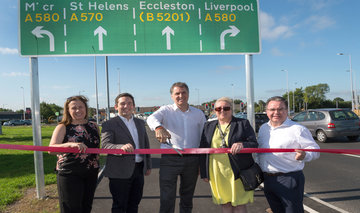 Senior politicians have given their seal of approval to a £7m investment that has significantly improved traffic and safety measures around one of Merseyside’s busiest road junctions.

Just a few months on from the completion of the Windle Island junction improvement scheme, St Helens Council Leader, David Baines; St Helens Council’s Cabinet Member for Environmental Services, Lynn Clarke – along with Liverpool City Region Metro Mayor, Steve Rotheram – were invited down to see the changes made first hand to the junction which sees around 43,000 vehicles pass through on a daily basis.

The project got underway in August 2018 and finished in April this year, four-weeks ahead of schedule.

Over half of the Windle Island junction improvement scheme – carried out by Balfour Beatty – was funded through the Local Growth Fund through the Liverpool City Region Combined Authority’s Single Investment Fund.

·The reintroduction of two lanes southbound through the junction, with the left hand lane for St Helens Town Centre via Rainford Road (including Tesco and Starbucks access), and the right hand lane for Eccleston and Prescot via Bleak Hill Road

·Two dedicated right turn lanes from the A580 westbound (towards Liverpool) onto the A570 northbound (towards Rainford). This will reduce queue lengths

Since works finished, the council has received a number of positive comments from road users experiencing improvements to their commutes, with quicker journey times and less queuing traffic among the compliments.

St Helens Council Leader David Baines said: “Windle Island is the oldest purpose designed intercity highway in the UK, and as it’s the gateway to the wider City Region and beyond, an upgrade was definitely needed if we’re to benefit from our prime position on the road network to increase growth in the borough.

“Not only as Leader of St Helens Council, but also as a Windle resident and ward councillor, I’m absolutely delighted with the end outcome of this scheme. All the benefits are clear to see including queuing which seems to be a thing of the past.

St Helens Council’s Cabinet Member for Environmental Services, Councillor Lynn Clarke said: “The condition of roads up and down the country is something motorists are quite rightly passionate about and always want to see improvements made to – and Windle Island is a symbol of our commitment to residents here St Helens Borough.

“I myself have had road users approach me and pass on their positive experiences of smoother journey experiences when passing through the new layout – and it’s comments like this that make it all worthwhile as we look to create well-connected, safe and accessible transport and digital networks across the borough.”

Metro Mayor Steve Rotheram said: “As a Combined Authority we are here to make life better for the people of the Liverpool City Region, specifically in areas like transport where it makes sense to work across council boundaries.  Improvements like these are vital – they not only make it easier for us all to get around but by providing better infrastructure we help businesses thrive, creating economic growth that benefits everyone.”

“We’re committed to boosting economic growth across the whole of the Northern Powerhouse and levelling up our regions.

“I am delighted to see the positive impact the Windle Island junction improvement scheme is already having on the local area thanks to £3.5million from the Local Growth Fund. Our investment is improving one of the region’s busiest gateways and supporting safer, quicker journeys for commuters and local residents in and out of Liverpool City Region.”

Balfour Beatty Project Director for the scheme, Andrew Leech, said: “We are delighted to complete these essential improvement works at Windle Island which will reduce congestion and journey times for road users, whilst improving safety for pedestrians.”

As a way of further committing to the borough’s highways network, St Helens Council’s Cabinet recently approved major funding of £8.3m which will be invested in a range of works – including pothole repairs and Pewfall junction on the East Lancashire Road, just further down from Windle Island.

Among the benefits of the Pewfall scheme, motorists will experience quicker journey times through an improved junction with the capacity to cope with increased traffic – while a dedicated pedestrian and cycle crossing will also be put in place across the Stanley Bank Way junction to enhance safety.

Work is expected to get underway this autumn.

Titled ‘Sparkle in the Square’ this year’s family-focused event was part of the St...