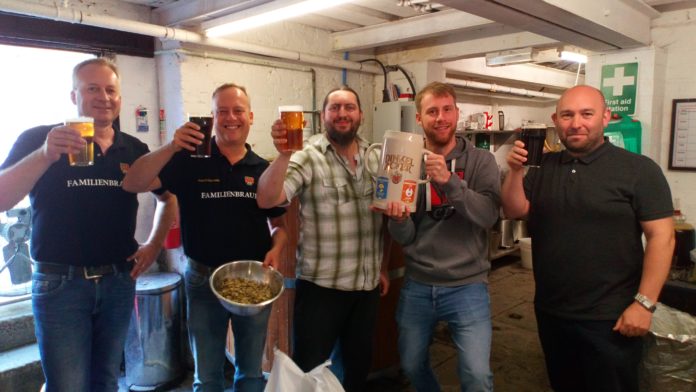 It’s often said that the Germans are good when it comes to pretty much everything.

Cars, engineering, beating England on penalties (probably shouldn’t say that with the World Cup here) – not to mention beer!

So what happened when a group of German brewers visited St Helens to create a collaborative ale with a local brewery to commemorate the 70th anniversary of the first twinning arrangement in Europe between Stuttgart and St Helens?

Representatives from Dinkelacker, a 130-year-old family-run brewery based in Stuttgart, were in St Helens recently as part of the two towns twinning agreement which was the first of its kind between an English and German town or city after World War Two.

During their stay, David Raudonat, Thomas Hessel and Joachim Schneider met with Kevin Yates from Connoisseur Ales based in Church Street which has resulted in the creation of a recipe for a 4.1 per cent ale called ‘Siebzig’ which translates to ‘seventy.’

Taking around one month to make, Siebzig’ has all the same ingredients of a traditional German “Märzenbier” but will be brewed with ale yeast instead.

It is expected to taste crisp, slightly sweet with many interesting flavours coming through from the combination of six English and German hops.

Commenting on the two breweries coming together to form one super beer, Kevin from Connoisseur Ales said: “This was the first collaboration brew we’ve ever done and working with a brewery 3000 times our size was certainly aspirational.

“The comparatively small size of our brewery meant that the visiting brewers felt much closer to the ingredients and brewing process than in their much larger brewery back home.

“We were able to benefit from over 130 years of brewing knowledge and experience and were introduced to new ingredients which we are likely to incorporate into our future beers.”

Joachim from Dinkelacker added: “The idea was to brew a beer that combines both the German and English brewing tradition. We brought three local hops over with us which we use to brew our ‘Festbier’ – our beer for special occasions – and used them together with English hops.”

So, what’s the verdict? I’m afraid you’ll have to wait and find out as it will only be ready to try over here at the beer’s launch at the St Helens International Food and Drink Festival next month.

The free to attend International Food and Drink Festival will see a variety of food and drink stalls from around the world – as well as a wide range of entertainment including live music from The Lancashire Hotpots – in Church Square as part of the borough’s 150th anniversary celebrations.

The event – supported by WISH FM and run in conjunction with Main Streat Ltd, a North West event management company specialising in street food events and festivals – will also focus on St Helens’ international relationships, particularly with its partner towns of Stuttgart, and Chalon-sur-Saone in France.

“We’ve seen how popular International Food Festivals have proved when staged in neighbouring towns and cities so I’m delighted that we’re able to bring one to St Helens town centre for the first time, which I’m sure will be a marvellous occasion, especially during our borough’s 150th anniversary celebrations.”

Local artist to share his experience of disability at library event