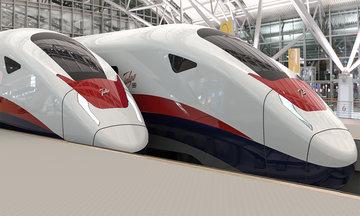 St Helens Council, with support of the Liverpool City Region Local Enterprise Partnership (LEP) and also working with the Combined Authority, have been working with Talgo for over a year on the project which has the potential to create thousands of jobs both at the manufacturing facility itself, but also within the Talgo supply chain.

The announcement was made (today) at an event in Birmingham held by Talgo to announce the manufacturer’s plans in the UK, as well as providing an opportunity for representatives from the shortlisted locations to showcase their strengths.

The investment could see train manufacturing ‘coming home’ to the borough that gave the world the first commercially operated train following the Rainhill Trials which celebrate their 190th year in 2019, as well as bringing manufacturing back to Newton-le-Willows which was home to one of the most famous factories – the Vulcan works.

The announcement from Talgo follows on from other positive news with official data showing that 4,000 jobs were created in St Helens between 2016 and 2017, and recent announcements of major investments at the M6 Major site as well as the relocation of Movianto into St Helens.

“St Helens has seen significant success in growing our economy over the last few years with almost half of all new jobs in the Liverpool City Region having been created in St Helens between 2016 and 2017 according to national statistics released last week.

“In addition, over 1.2million square feet of development in underway this year with potentially the three biggest industrial projects in the North West all happening within the Borough. It’d be a great time for Talgo to come to St Helens too.”

St Helens Council Leader, Cllr Derek Long said: “We’re competing hard across the UK to bring these high quality jobs to the borough and are committed to ensuring that not only does St Helens attract a greater volume of jobs but the highest quality of jobs too. This is why we have been actively working with partners to try and bring Talgo to St Helens as we see high-quality train manufacturing jobs as exactly the type we would like to see come to the borough.

“The borough has a great manufacturing tradition and an exceptionally skilled workforce. We are also mid-way between Manchester and Liverpool which means we can tap into a fantastically diverse labour market while Newton-le-Willows itself has been a centre for train production in the near past.

“We believe that Newton-le-Willows, and St Helens more widely, would provide the ideal location for Talgo to locate their UK operation.”

“My constituency and the wider Borough of St Helens has a fantastic heritage when it comes to railways and would provide an ideal location for Talgo to base a new UK factory.

“Not only did the Rainhill Trials take place in the borough, but one of the first manufacturing facilities for trains in the world was situated in Newton-le-Willows in the very same area to which we are trying to attract Talgo. Combine that tradition, with a highly capable workforce, and great connectivity and you have an ideal location for a high speed train manufacturer.”

“Building a world class rail manufacturing cluster in the City Region is one of our strategic economic priorities. We have outstanding facilities, talent and infrastructure and have been working closely with St Helens to help Talgo to take advantage of these in Newton le Willows and bring rail manufacture back to where it all began.”