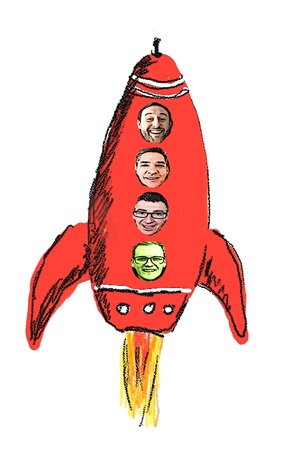 An exciting guide to life in space was presented in library performances recently as part of the award-winning Cultural Hubs, arts in libraries programme.

The event was commissioned by libraries and held on the 50th anniversary of the first Moon landings by Apollo 11 astronauts Neil Armstrong and Buzz Aldrin.

Presented by St Helens’ Pop Up Players, Pop Up Guide to Life in Space took library visitors to the year 2069 – a century since the first moon landings – when space is what Britain is running out of. The only place left for mankind is the Moon, but what will life be like on the lunar surface?

In the performance, a nationwide competition is held to produce the Definitive Guide to Intergalactic Living, with the winners set to receive a rent-free, fully furnished, luxury crater on the Moon. Enter three intrepid science fiction geeks, Gordon, Kirk and Albert. Throughout their lives, they’ve been crowded out and ridiculed by the ‘popular kids’ for their love of all things sci-fi, but here they’ve a chance to put their expertise to good use.

Dozens of families joined the Pop Up Players for free at Newton-le-Willows and Eccleston libraries as they shot for the Moon. Performances also took place for almost 400 school children at libraries during the week.

St Helens Council’s Cabinet Member for Public Health, Leisure and Libraries, said: “Performers from Pop Up Players have done great work with the library service in the past and this event was no exception. It was great to see lots of local families come out and enjoy our libraries in this way, taking advantage of the unique cultural offer on their doorstep in a way that only St Helens residents can.”

The current season of the nationally-renowned Cultural Hubs, arts in libraries programme is coming to a cosmic end soon, but there are still plenty of great events to come for all ages.

For full details, and to find more fantastic events, many of which are free to attend, visit www.culturalhubs.eventbrite.co.uk or pick up a brochure from any St Helens library.