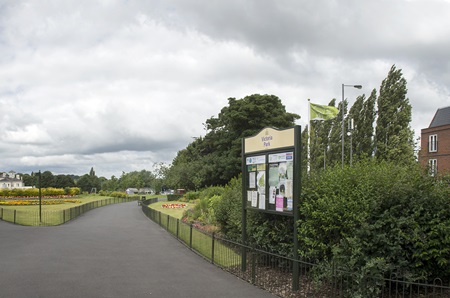 Victoria Park has again been recognised by the Green Flag Award scheme as one of the very best green spaces in the world.

The park is among a record-breaking 1,970 parks and green spaces in the UK and 131 across the globe that have recently received a prestigious Green Flag Award – the mark of a quality park or green space.

It’s the fifth award Victoria Park has received in consecutive years, since it was first awarded in 2015.

This international award, first launched in 1997, is a sign to the public that the space boasts the highest possible environmental standards, is beautifully maintained and has excellent visitor facilities.

The historic park and Grade II listed Mansion House have benefitted from over £3 million secured through the Heritage Lottery Fund, with many of its original features – dating back to the 1850s – repaired and restored in recent years.

The park is continually being developed, and this year has seen the provision of further wild flower meadows in the park to attract more wild life and insects.

Recent improvements include the reinstatement of the boundary wall and fencing on Balker Drive, and the final restoration of the perimeter fence on Rutland Street.

Councillor Lynn Clarke, St Helens Council’s Cabinet Member for Environmental Services, said: “The number of times Victoria Park has been awarded is testament to the dedication of our Rangers and grounds maintenance teams, community groups like the Friends of Victoria Park, and of course our residents, who are mindful to take care of this wonderful community asset.”

“Each flag honours the thousands of staff and volunteers who work tirelessly to maintain the high standards demanded by the Green Flag Award. We congratulate each and every winner on their fantastic achievement.”

Council quids in after Multihog investment