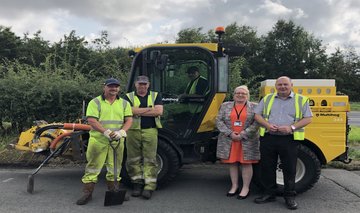 Meet the seven-tonne beast that eats potholes and other highway defects for breakfast.

In July 2016 – St Helens Council invested in a Multihog to reduce the long-term costs of road repairs around the borough.

Three-years on, the council has to date achieved savings of £120,000 through the hydraulically-operated, multipurpose vehicle which has assisted in the completion of 4,500 carriageway repairs – as well as various footway improvement schemes that would have otherwise been undertaken by external contractors.

A 400mm wide road milling planer attachment fitted with 53 carbide tipped teeth, powered by the Multihog operator from the comfort of the cab, excavates defective road areas allowing for a more permanent repair by removing the underlying imperfections.

Works are carried out in a fraction of the time they would normally take to do by hand – resulting in the highways team having the capacity to get round to doing more repairs on a daily basis.

Elsewhere on the four-wheel drive machine – which can hit speeds of up to 30mph – a high lift bucket at the front means the team don’t have to shovel large amounts of debris caused from the repairs, which significantly speeds up the cleaning process and reduces the amount of dust produced as a result.

Additionally, the machine is much quieter than traditional jack hammers which should please residents while also benefitting the workforce, as it vastly eliminates hand-arm-vibration-syndrome caused by continuous use of vibrating hand-held machinery.

“The Multihog has proved to be a fine investment – saving not only much-needed money from the highways budget – but also the time of the highways team who are able to get repair work done more efficiently  to a much higher standard.

“The conditions of the borough’s roads is something I and road users alike would like to see improvements made to – and its exceptional pieces of machinery like the Multihog that are literally paving the way for these improvements to happen quicker, while saving the council money  in the process.

“It’s also the most environmentally way to repair our highways because it reuses existing road materials, so a win-win all round.”

Amazing Blake in return to Brindley

Be a Good Guy this autumn