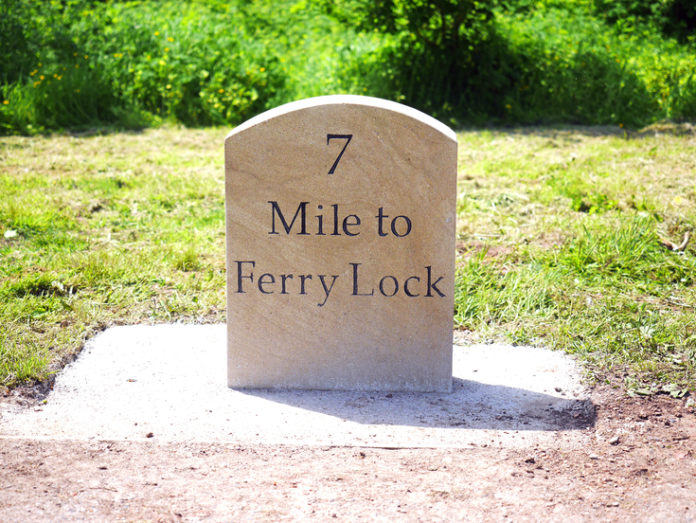 As part of the borough’s 150th anniversary celebrations, Dr. Barrie Pennington of the Milestone Society has donated a replica canal milestone to St Helens Council.

Measuring 80 centimetres high, 45 centimetres across and 15 centimetres deep, the replica is made from Fletcher Bank stone sourced from Ramsbottom and now stands proudly near Bradley Lock in Newton-le-Willows.

Barrie from Crank had read in a copy of ‘Canal Cuttings’ – the journal of the Sankey Canal Restoration Society (SCARS) – of the poor condition of the canal’s only remaining milestone languishing in the garden of the Sankey Valley Heritage Centre in Blackbrook to where it was moved when the centre was opened.

The author of the article hoped that, one day, replicas could be put in place along the waterway as part of the Society’s continuing work to renovate the country’s first canal of the industrial era.

Taking up the challenge, Barrie worked with SCARS to agree on dimensions and design.

Identifying the exact location of the original milestone at Bradley Lock was made easy by the existence of photographs from 1963 and it can also be seen in the drama ‘Faith and Henry’ which can be downloaded from the British Film Institute website.

Barrie arranged for a local stonemason to cut the replica and co-ordinated with St. Helens Council’s Service Manager, Dave Bloor, to install it.

Dave, who has worked with Barrie before on the successful move of two milestones from Balker Drive to Victoria and Taylor Parks, said: “It is pleasing to work with interested parties and societies to maintain our proud industrial heritage.

“St Helens contributed significantly to the Industrial Revolution and helping to keep that history alive is very rewarding.”

Barrie added: “Once again, I would like to thank Dave Bloor, Greenspace Inspector Pete Morris and the installation team for their expertise in this heritage project. Without the council’s kind assistance and invaluable support such schemes would prove nearly impossible.”

Colin Greenall, Chairman of the Sankey Canal Restoration Society said: “We are delighted that our work is reaching so many people and inspiring contributions to the ongoing renovation of the canal.”

Although grammatically incorrect in that an ‘s’ has been missed off ‘mile’, it is likely that the stonemason who worked on the original milestone in the eighteenth century was simply following common local dialect. Even now, it is quite usual to hear a St Helener drop the letter ‘s’ when describing distances in miles.

With the replica, it was decided to copy the original as accurately as possible – mistakes and all. The Sankey Canal Restoration Society is now working with its partners in the Canal and River Trust, St. Helens, Halton and Warrington councils on the production of more replicas to be placed wherever possible along the canal.