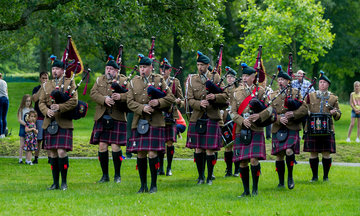 The free Armed Forces Day event – organised by St Helens Council with supported contributions from the Ministry of Defence’s Armed Forces Day Fund – started with a parade involving armed forces representatives, veterans and cadets – before a packed programme of events and entertainment got underway, with plenty on offer for all the family to enjoy.

Attractions on the day included live music at the Victoria Park bandstand organised by the council’s Music Service. Groups to perform were the service’s choirs; big band; wind and training bands, playing a varied programme alongside the Lancashire Artillery Pipes and Drums, Royal Marines Association Corps of Drums; St Helens Mind Choir; and 1940’s entertainer, Goldenage Songbird. While vintage military vehicles, a funfair, climbing wall; and an inflatable assault course also went down well with the thousands of visitors in attendance.

Meanwhile, a ‘Great Get Together’ event hosted by the Friends of Victoria Park in association with St Helens Rotary, also took place in the park that day, with arts and crafts; musical performances; and a Victoria sponge cake competition among the entertainment.

Hailing the day a success, St Helens Council’s Armed Forces Champion, Councillor Lynn Clarke, said: “Armed Forces Day is a really important occasion, giving the council and local residents the opportunity to commemorate and thank all of our serving personnel; veterans; and cadets.

“It was great to see such a fantastic turnout and people thoroughly enjoying their day. The bands were tremendous; really heart-stirring stuff – and we were lucky with the weather which was an added bonus to such a brilliant day.”