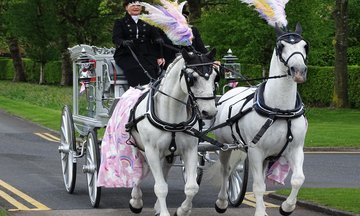 St Helens Cemetery and Crematorium has this week hosted a community event designed to help people talk more openly about dying, death and bereavement, and to make plans for end of life.

The event showcased some popular funeral arrangement options; with a horse drawn hearse decorated in rainbow colours opening the event, doves released on the hour and a Land Rover hearse, as well as more traditional vehicles and limousines.

Visitors were also given a guided tour behind the scenes of the crematorium, as Bereavement Services staff dispelled some of the many myths surrounding cremation ceremonies – including ash contamination, specific people needed to hold funeral services, and the coffin going on to be instantly cremated once it goes through the blue curtains.

“With the theme of this year’s Dying Matters Awareness week being ‘are we ready’ we focused on getting people to plan ahead and sort out the practical things. Write your will, plan your funeral, decide on organ donation and your future care wishes; write all of this down and tell others.

“It’s always an emotional time when someone we care about dies, but it’s made easier if we know that all the plans are in place, they had the care they wanted, the funeral is all set, there’s no dispute about the will. It makes a tough time easier to deal with.

“It’s been really heart-warming to read all the positive feedback left from visitors, with many commenting on how it has put their minds at ease on the day and some residents coming back again who visited last time. It’s a brilliant example of engagement with the community and I hope that it’s helped put people at peace about the funeral process.”

St Helens Council works with community organisations like the Friends of St Helens Cemetery as a way of supporting residents to look after the things that matter to them and help to build a better place and environment for everyone to enjoy.

To find out more about the Friends of St Helens Cemetery and how to support them visit www.friendsofsthelenscemetery.co.uk and for more information on St Helens Council’s Bereavement Services visit www.sthelens.gov.uk.

Local artist to share his experience of disability at library event

Fireworks spectacle at Sherdley Park will hit all the right notes