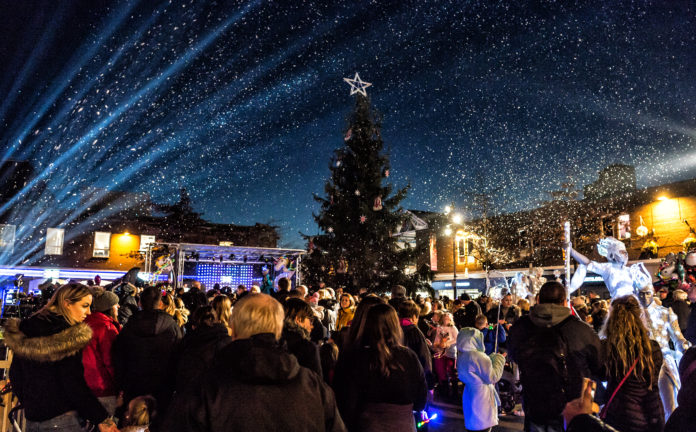 Titled ‘Sparkle in the Square’ this year’s family-focused event was part of the St Helens 150 celebrations and shone a light on the borough’s talented musicians, local acts and school choirs who took to the stage to entertain the large crowds of people.

Meanwhile, an array of street entertainers lined up in Church Square to mesmerise shoppers with their spellbinding acts – not least the stunning Winter Fairy who thrilled audiences with her skilful contact juggling show.

The Mayor and Mayoress of St Helens, Councillor Pat Ireland and Lynn Glover, then had the pleasure of joining young Kaycee Bradshaw – a six-year old girl from Sutton living with a rare condition called Batten Disease – as well as St Helens-born Premier League footballer, Conor Coady, in switching on the Christmas lights to officially launch the start of the festive period in St Helens.

But perhaps the most poignant moment of the evening was when the audience joined together for a rendition of ‘A Fairy Tale of St Helens’ – a charity song written for Kaycee, with proceeds going to her Just Giving page.

Hailing the event a success, St Helens Council’s portfolio holder for arts and culture, Councillor Gill Neal said: “This year we decided to take a different approach to our Christmas lights switch on event, with the intention of delivering a more family friendly and community focused event, as well as relocating to Church Square to support the town centre’s shopping offer.

“Given the impressive turnout on the night, it’s safe to say that decision paid off and I’d like to thank event organisers for putting together this fantastic bill of entertainment which brought our communities together to celebrate the very best of St Helens in our 150th year at what is considered by many to be the most wonderful time of the year.”

For regular updates on events over the Christmas period, including magical audio visual spectacle event, We Are Still Here’ in Victoria Square on Saturday 8 December and the return of Father Christmas and his reindeer on Saturday 15 December, like What’s On In St Helens on Facebook, or give @whatsonsthelens  a follow on Twitter.