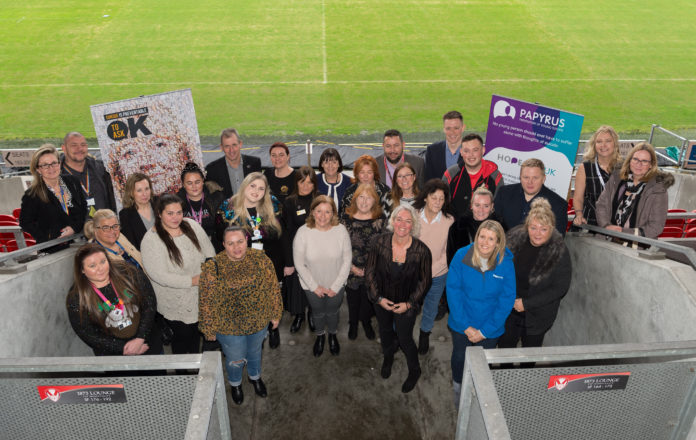 Offload is an award-winning project run by Rugby League Cares which builds mental fitness in men by creating a programme of sessions based around the premise of a rugby match.

The 10-fixture scheme sees sessions take place in different locations such as sports dressing rooms in two 40-minute periods, replicating the time of a rugby match. Saints Community Development Foundation are behind the project coming to St Helens after proving popular at Salford Red Devil, Warrington Wolves and Widnes Vikings.

It will play a part of the OK2ASK campaign from St Helens Council which encourages people to talk about how people are feeling and not be afraid to ask someone if they are thinking about suicide.

Offload is in partnership with the National Lottery Fund and CHAMPS public health collaborative in Cheshire and Merseyside with the four rugby league club foundations.

Councillor Anthony Burns, cabinet member for public health, leisure and libraries, said: “We know many men will not talk about how they feel and think that ‘manning up’ is keeping quiet. But we need to fight this issue as it can lead to people not getting the help they really need and may even lead to someone taking their own life. When you see that suicide is the biggest cause of death in men under 50 we have to do all we can to tackle this issue.

“That is why we are backing Offload, which is a brilliant way to break down the walls for men to talk openly about how they are feeling and get advice on how to deal with the pressures that life may throw at them.”

Liam Parker, Health Projects Manager at RL Cares, said: “Offload has a proven track-record of both changing and saving lives and we are delighted to have opportunity to deliver our programme to the people of St Helens.

“More than 1,000 men across the North West have already attended Offload fixtures and we know from the feedback they have given us what a positive difference it makes to the quality of not only their lives, but the lives of their families and the people around them.

“Working in partnership with Saints Community Development Foundation, St Helens Borough Council and the OK TO ASK campaign will enable us to continue that good work and empower more men to be able to cope, and talk comfortably, about important health issues.”

Chris Chamberlain, Project and Finance Manager at Saints Foundation, added “After extensive consultation and understanding the local needs from across St Helens, it became evident that Offload would be great to support people within St Helens.

OK2ASK has been developed collaboratively with The St Helens Suicide Prevention Task Group with the support of families in St Helens Borough who have tragically lost someone to suicide through St Helens Survivors of Suicide Bereavement Group (SOBs).

Anne Cunliffe from Haydock, who got involved with SOBs after losing her son to suicide 17 years ago, aged just 19, was at the Offload launch, said: “There were no signs of mental health with Andrew. I’ve lost my son and there’s nothing I can do to bring him back. But I’m very passionate about hope for other families.

“It’s okay to have that conversation. We can all do something to make a difference because suicide is preventable, and the work the council is doing in raising this awareness, for me, is just amazing and you can see that it’s really making a difference.”

OK2ASK focuses on the life-saving conversations anyone could have by asking someone ‘are you thinking about suicide?’.

To find out more about the campaign, support groups available to help and the signs to look out for if you’re worried about someone and how to talk to someone about suicide visit oktoaskcampaign.co.uk