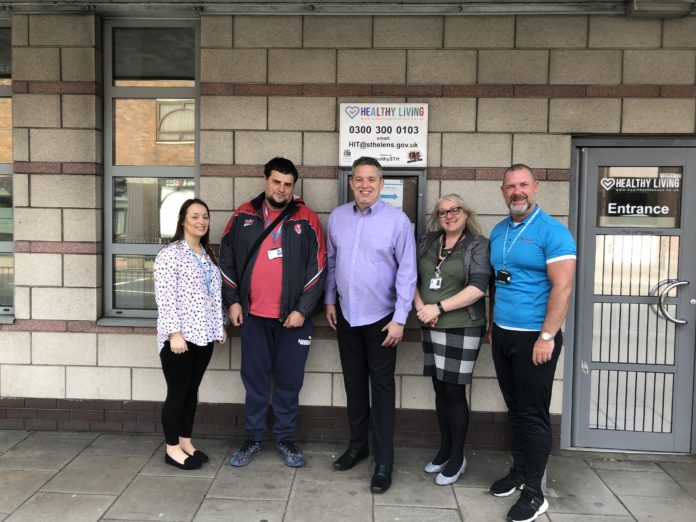 Meet Stephen Lea and James Baldwin, a couple of St Helens Healthy Living workers who have become valuable assets to the service since joining two years ago.

Stephen, 47, from Haresfinch has a left-sided brain injury from birth, while James, 39, lives in Prescot and has a learning disability.

The two have become good friends since meeting on St Helens Council’s supported employment course at Stephenson Resource Centre in Rainhill; an  example of how the council is working to create a better place by supporting skills and creating employment opportunities for all.

After gaining a qualification in maths and English, they went onto secure a part-time job within the Healthy Living Team where they’re tasked with promoting programmes such as the Fit4All project – as well as getting involved in a number of activities such as outdoor walks; gym sessions and the ‘Supporting Arm’ group for vulnerable service users, for which they are considered experts as they test out resources and  develop their own innovative ideas to support people with additional needs to adopt healthier lifestyles.

“We started at the same time just over two years ago, although it seems longer than that,” joked James, who, when asked what his favourite aspect of working for the Healthy Living Team was, simply replied ‘everything.’

“We like the whole lot. Working as part of the team and making new friends has made our confidence and social skills grow,” he said.

Agreeing to James’ response with a nod, Stephen added: “We’ve been welcomed with open arms here; it’s really brought us out our shells.”

Being part of the team has led to just more than just a confidence boost too. Working in a health-focused environment has resulted in the pair taking on a more motivated approach to looking after their own health, with James developing his own personal gym programme while Stephen has lost more than a stone in weight since attending Queens Park Leisure Centre four-times a week.

“I’ve been on a bit of a health-kick since starting here and now I’ve been challenged by my sister to lose another two stone and then I’ll be on my way to Memphis to visit Graceland, “said Stephen, a massive Elvis Presley fan.

“Being here has brought a lot out of me and goes to show that a disability doesn’t have to stop you from living an independent life.”

Commenting on the progress the two have made since joining the team, Health Improvement Project Officer, Lisa Walken, said: “Stephen and James have made a fabulous addition to our team and being here has done them the world of good.

“They’re always helping out in all the teams and we can’t get rid of them sometimes, telling them to get home come the end of the day – and they’ll even come in on their days off,” she laughed.

For more information about the supported employment scheme, visit: www.sthelens.gov.uk/social-care-health/adults/services-for-adults-with-additional-needs/supported-employment/

To find out more on what the Healthy Living Team has to offer, visit http://www.healthysthelens.co.uk/

Council and partners work to help children at risk from gangs

Pilot set to improve recycling and modernise the collection service

Be a Good Guy this autumn

Thousands turn out for Sparkle in the Square