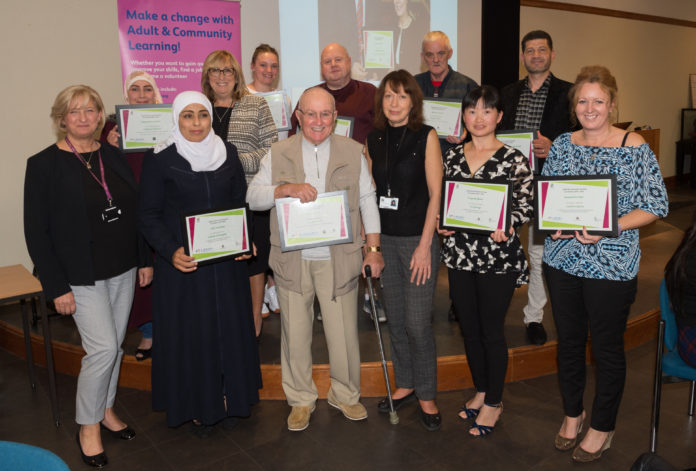 As part of the National Festival of Learning, a special event was held at the World of Glass in St Helens recently to celebrate the achievements of adult learners who have used learning to transform and improve their lives.

Organised by St Helens Council’s Adult and Community Learning (ACL) service, the event acknowledged the dedication of learners who have taken positive steps to enrich the lives of themselves and others by gaining skills and qualifications to improve job prospects, support their community and improve their quality of life.

Councillor Sue Murphy, St Helens Council’s deputy leader and portfolio holder for education, was among those in attendance on the night to present certificates to ACL learners who had attended courses during the past year and gained qualifications in a wide range of subjects including ESOL (English for Speakers of Other Languages), teaching assistant courses, as well as maths and English.

Eighty-three-year-old James Booth from the town centre was one of 11 learners to be awarded on the night for proving that age doesn’t have to get in the way of acquiring new skills after completing a Digital Learning course.

James – who became isolated after losing his late wife nearly four-years-ago – was advised by his family to take up something new, and so he purchased a laptop and enrolled on an ACL course to try and get up to speed with the digital age.

Commenting on his decision to take on an ACL course – which has helped him develop IT skills to type up poems to read to his late wife when he visits St Helens Cemetery; as well as learn how to use his smartphone – James joked: “Times have moved on. We don’t need two tin cans and a piece of string to use as a telephone like we did when I was a kid.

“I’m glad I went on the course – it gave me a purpose to leave my flat, get out and meet new people. I’d recommend it to anyone; both young and old.”

Paying tribute to the learners and the tutors who supported them along the way, Councillor Murphy said: “It is truly inspiring to hear the journeys our learners have been on over the past 12-months. All of our winners on the night decided to return to learning for different reasons, and I’m delighted that this has had a positive, if not transformational, impact on their lives.

“Each and every one of them has worked so hard to get to this stage. From using a computer for the first time and facing up to a fear of maths – to travelling half way across the world to find a safe place to bring up their families while developing and progressing their English communication skills.

“These people have shown that learning is possible at any age, for any reason and can be for all of us. Our ACL staff deserve a special mention for their hard work and dedication to help adult learners flourish”.

If you are interested in enrolling on an ACL course, call 01744 677315 or email adultlearning@sthelens.gov.uk for more information.

Photo caption one:  Councillor Sue Murphy (back row, second on left) was on hand to present 11 adult learners – including 83-year-old James Booth (first row, third on left) with certificates after completing courses to improve job prospects, support their community, and improve their quality of life.

Photo caption two:  ACL staff came in for praise for supporting the adult learners along the way.

ADVICE IF YOU HAVE BEEN TO WUHAN, CHINA, IN THE LAST 14 DAYS …