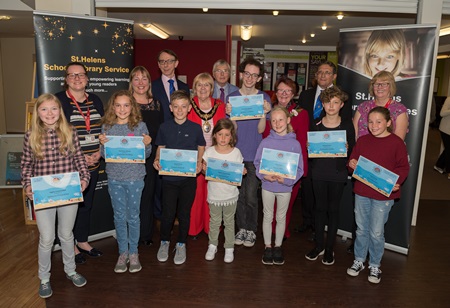 Budding young writers have been awarded for taking part in a writing competition with St Helens Libraries, themed around environmental issues.

The Super Writers: Be an Eco Hero competition wrapped up recently, having seen more than 120 entries from children and young people across St Helens Borough, with winners awarded with up to £50 in book vouchers.

Competitors were tasked with writing short stories of no more than 500 words, using one of a selection of story starters or endings; from polar bears facing the effects of global warming, to deforestation and flooding.

As part of the competition, young writers had the opportunity to join a masterclass workshop with Mark Powers, the author behind the fantastic children’s book series Spy Toys. Mark delivered a ‘Show, Don’t Tell’ creative writing workshop helping competitors to bring their stories alive through vivid description.

The competition was sponsored by Newton-le-Willows Rotary Club and the West Lancashire Freemasons.

Matthew Griffiths, 17, from Cowley International College reached first place in the tough secondary school category for his story entitled ‘The Riverbank’, in which wildlife emerges from hiding in the aftermath of devastating floods, to find beauty that remains in their habitat.

“It was fantastic to see so many young people from schools across the borough take part in this competition with our Library Service, and we’re grateful for the support of our community group sponsors.

“Every entry demonstrated incredible talent, taking our simple starters and endings and producing some wonderfully creative stories. These stories were full of thought-provoking ideas under the eco hero theme, which is what we really wanted to see as we celebrate the Year of Environment – a year of green action across the Liverpool City Region.

“Securing Mark Powers to share some of his masterful wisdom was a great move by the library team, and I’m sure that our budding young writers found it useful for developing their writing style and confidence. I’d like to thank everyone for getting involved!”