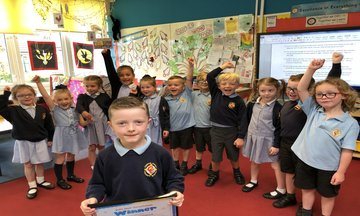 A six-year-old boy has helped create a new buzz for the reopening of a fitness centre in Newton-le-Willows following a £4.2m redevelopment.

Roberto Salamanca won a competition to name the new soft play centre, one of the new attractions coming to Newton-le-Willows Health and Fitness Centre, with the name Willowbees.

Judges were impressed with his name after asking children across St Helens Borough to submit their ideas for the new soft play area that will open later this year at the former Selwyn Jones site.

The Corpus Christi Catholic Primary School pupil found out the good news among his classmates who were all celebrating with him as he won a trip for them all to try out the new facilities when they open.

Roberto has also won a birthday party at the play centre for his winning name.

Willowbees play centre will be available to children under the age of 11 along with a café and three party rooms. And it will be one of the star features of the redevelopment that will create a multi-use exercise studio, immersive exercise bike studio and a 90-station fitness suite.

Councillor Anthony Burns, Cabinet Lead for Public Health, Libraries and Leisure, said: “Well done to Roberto who has wowed us with his creative name that will certainly help us create a fantastic soft play area. I’m sure he will absolutely love trying out this new attraction that will offer people visiting the refurbished centre something for all the family to enjoy.

“We’re committed to offering activities that will bring a wealth of opportunities for every age range in the area and the new state-of-the-art facilities will be a great draw for residents living in Newton-le-Willows, Earlestown, Haydock and further afield.”

Willowbees will open its doors to visitors later this year.

Parents of young children in St Helens are being urged to make the most...

Lost Castles: Help us create a castle from cardboard this Friday!