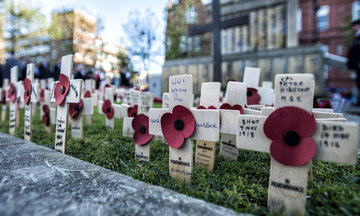 After four years’ fighting, and the deaths of millions, St Helens will come together 100 years on to the day, to commemorate the fallen at Remembrance Sunday ceremonies across the borough.

The events will, of course, also be an opportunity to honour those who died during all conflicts of the 20th and 21st centuries.

As in previous years, residents are invited to congregate at Victoria Square on Sunday 11 November at 10.25am, where a parade – led by Armed Forces veterans and young representatives from the Cadets, Scouts and Guides – will make its way from Birchley Street to the war memorial in front of St Helens Town Hall.

The ceremony will open with a welcome and prayers from local parish reverends before the square observes a two-minute silence at 11:00am.

Following the service, the town hall will be open for tea and coffee where there will also be the opportunity to view a local World War One photo exhibition, courtesy of the St Helens Community Archive.

Across the borough, parish councils will also be hosting Remembrance events. In Earlestown and Newton-le-Willows the focal point will be the war memorial at Earlestown Town Hall, with the event due to get underway at 10:45am. St Helens North MP Conor McGinn and Deputy Mayor of St Helens, Janet Johnson, are among those due to attend.

In Rainhill, a morning service at St Ann’s Church will be followed by a parade and wreath-laying ceremony at 12:00pm, during which the A57 Warrington Road will be closed to traffic between View Road and St James Road.

Meanwhile, as part of the St Helens 150 events programme, St Helens will participate in a national tribute event that evening.

The ‘Beacons of Light’ tribute will see a gas fuelled beacon lit at Taylor Park to symbolise the ‘light of hope’ that emerged from the darkness of war.

The ceremony will get underway at 6:45pm, with those interested in attending asked to meet at the Boathouse Café at 6:30pm.

The beacon will be lit at approximately 7:00pm.

In St Helens Town Hall the evening before (Saturday 10 November), the Haydock Male Voice Choir will perform a a special ‘Bless ‘Em All’ concert to mark the centenary of the armistice.

The lovely and talented Ellie Hull will sing Vera Lynn numbers and there will be a chance for audience participation.

The Royal British Legion and army and navy cadets will join in for a ‘Last Night of the Proms’ type grand finale.

St Helens Council’s Armed Forces Champion, Councillor Lynn Clarke said: “Remembrance Sunday is a fitting opportunity for us to honour our servicemen and women who gave the ultimate sacrifice for their country – and this year we are proud to be playing a part in the historic international event, ‘The Beacons of Light’ to recognise the contribution and sacrifice made by the men and women from our own community.

“Each year, it’s moving to see such incredible turn outs at Remembrance Sunday events, with young and old coming together to pay their respects which is a heart-warming reminder that St Helens will always remember.”